The structure of Naqsh-e Rustam is a massive necropolis carved out of a mountain that is located about 12 km northwest of the destroyed capital of the ancient Achaemenid Empire named Persepolis.

It is best known as featuring the elevated tombs of four Achaemenid kings that were constructed into the mountain. These are the tombs of Darius I, Xerxes I, Artaxerxes I, and Darius II. There is a fifth and unfinished tomb that people attribute to either Artaxerxes III who reigned for two years or possibly for Darius III which is most likely as he was killed early in his reign. 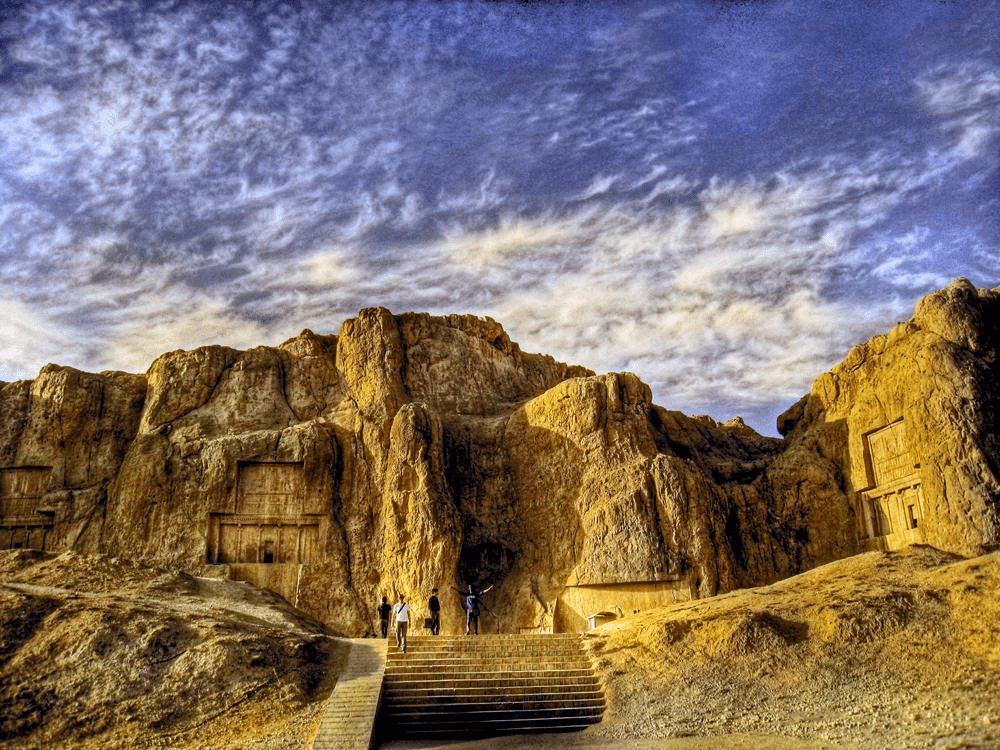 The tombs of Naqsh-q- Rustam were looted upon the conquest of the Persian Empire by Alexander III the Great.

The tombs are known locally as the 'Persian crosses', after the shape of the facades of the tombs. The entrance to each tomb is at the center of each cross, which opens onto to a small chamber, where the king lay in a sarcophagus. The horizontal beam of each of the tomb's facades is believed to be a replica of the entrance of the palace at Persepolis. 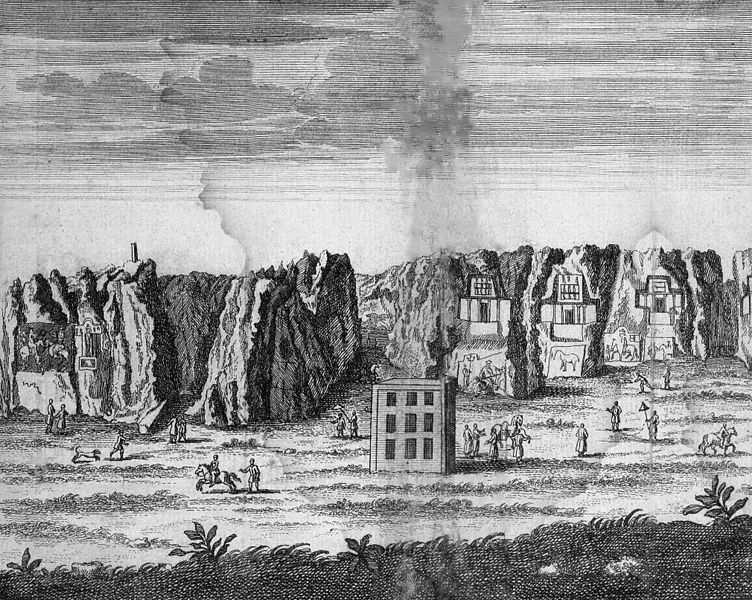 The oldest reliefs on the structure can be dated to around 1000 BCE which suggests it was a symbolic site long before it became a mausoleum. The relief depicts a man in headgear that appears to be from Elam. 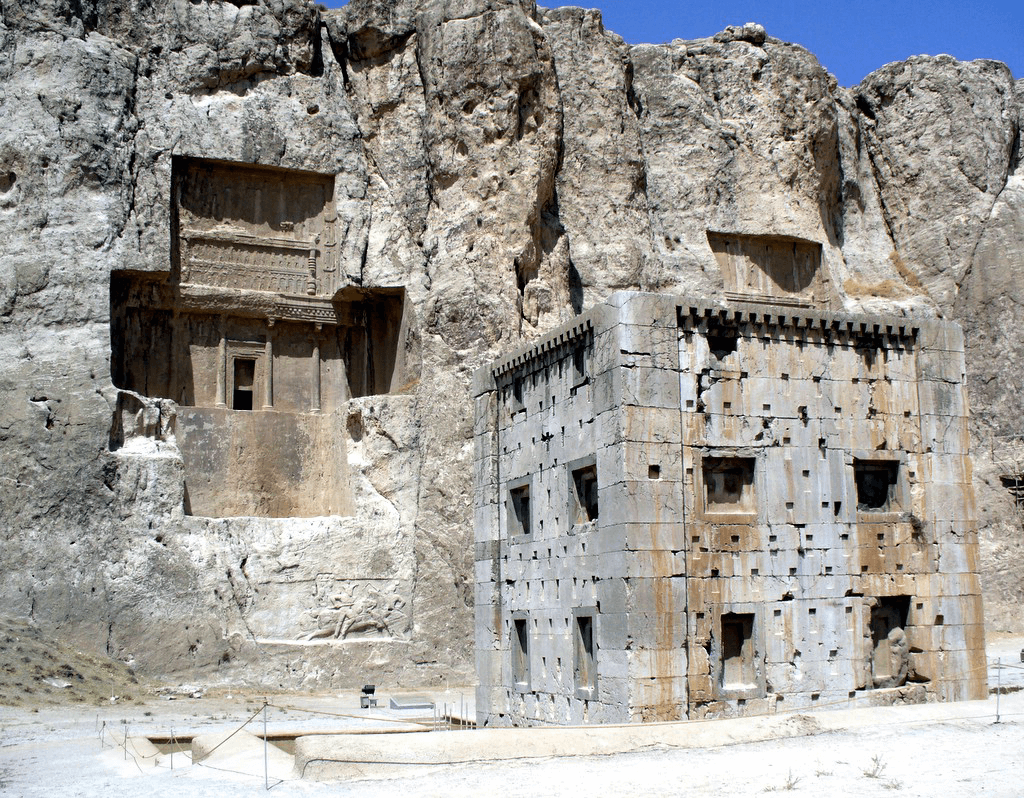 The depiction is part of a larger mural, most of which was removed at the command of Bahram II. The man with the unusual cap gives the site its name, Naqsh-e Rostam, "Rostam Inscription", because the relief was locally believed to be a depiction of the mythical hero Rostam.Contents [hide]1 Achaemenid tombs2 Sassanid reliefs3 Archaeology4 See also5 Notes6 Bibliography7 External linksAchaemenid tombs[edit]Colorized photograph of Naqsh-e Rustam from 1921 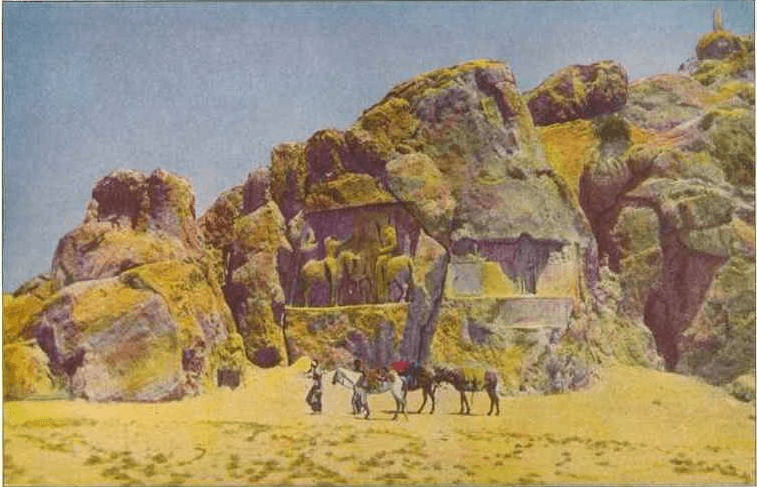 Sassanid reliefs[edit]The investiture of Ardashir I.The triumph of Shapur I over the Roman Emperor Valerian, and Philip the Arab.Seven over-lifesized rock reliefs at Naqsh-e Rustam depict monarchs of the Sassanid period.The investiture relief of Ardashir I (c. 226-242):The founder of the Sassanid Empire is seen being handed the ring of kingship by Ahura Mazda. In the inscription, which also bears the oldest attested use of the term 'Iran' (see "etymology of 'Iran'" for details), Ardashir admits to betraying his pledge to Artabanus IV (the Persians having been a vassal state of the Arsacid Parthians), but legitimizes his action on the grounds that Ahura Mazda had wanted him to do so.The triumph of Shapur I (c. 241-272):This is the most famous of the Sassanid rock reliefs, and depicts Shapur's victory over three Roman emperors, Gordian III, Valerian and Philip the Arab.[1] A more elaborate version of this rock relief is at Bishapur.The "grandee" relief of Bahram II (c. 276-293):On each side of the king, who is depicted with an oversized sword, figures face the king. On the left stand five figures, perhaps members of the king's family (three having diadems, suggesting they were royalty). On the right stand three courtiers, one of which may be Kartir. This relief is to the immediate right of the investiture inscription of Ardashir (see above), and partially replaces the much older relief that gives Naqsh-e Rustam its name.The two equestrian reliefs of Bahram II (c. 276-293):The first equestrian relief, located immediately below the fourth tomb (perhaps that of Darius II), depicts the king battling a mounted Roman soldier.The second equestrian relief, located immediately below the tomb of Darius I, is divided into two registers, an upper and a lower one. In the upper register, the king appears to be forcing a Roman enemy from his horse. In the lower register, the king is again battling a mounted Roman soldier.Both reliefs depict a dead enemy under the hooves of the king's horse.The investiture of Narseh (c. 293-303):In this relief, the king is depicted as receiving the ring of kingship from a female figure that is frequently assumed to be the divinity Aredvi Sura Anahita. However, the king is not depicted in a pose that would be expected in the presence of a divinity, and it is hence likely that the woman is a relative, perhaps Queen Shapurdokhtak.The equestrian relief of Hormizd II (c. 303-309):This relief is below tomb 3 (perhaps that of Artaxerxes I) and depicts Hormizd forcing an enemy (perhaps Papak of Armenia) from his horse. Immediately above the relief and below the tomb is a badly damaged relief of what appears to be Shapur II (c. 309-379) accompanied by courtiers.Archaeology[edit]In 1923, the German archaeologist Ernst Herzfeld made casts of the inscriptions on the tomb of Darius I. Since 1946, these casts have been held in the archives of the Freer Gallery of Art and the Arthur M. Sackler Gallery, Smithsonian Institution, in Washington, DC.Naqsh-e Rustam was excavated for several seasons between 1936 and 1939 by a team from the Oriental Institute of the University of Chicago, led by Erich Schmidt.[2]